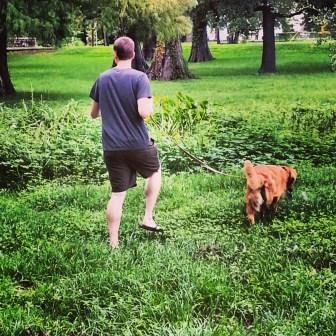 My son, Charlie, is married, and in his thirties now. But I still feel the same about him as I did the day I first held him in my arms. He looked up at me and winked. Little did I know it was a foretelling that he would always be a couple steps ahead of me.

He weighed in at five pounds, six ounces, and was five weeks early. As he lay on my chest, eyes shut, his tiny mouth searching for something to suck on, he reminded me of a baby bird. He didn’t have any trouble finding what he needed, and soon grew so big my dad asked if I should consider putting him on a diet. He was only getting breast milk. That was until…

Before he could walk, Charlie loved my homemade oatmeal cookies. They were giant-sized discs, filled with walnuts and raisins, chocolate and butterscotch. I ate them while I nursed and before long, Charlie was eating them too. He’d sit in the umbrella stroller—his little knees reaching to the sides of the frame—holding a cookie with both hands, chocolate on his cheeks and a big smile on his face.

These images return as I watch him training to become a professional chef. I like to think I had something to do with that.

When he heard me tell someone he was a chef, he said, “Stop saying that, Mom.”

“I’m a cook. I work the hot line.” He also prepares menus and creates recipes—his humility makes me prouder of him than anything else as he works along-side a chef in Wilmington, NC. Now Charlie is the one responsible for nourishing others.

I listened as he read to me from a cookbook his chef had given him. I thought how at one time it was comic books that captured his attention. He asked me to sit down beside him and watch videos of chefs he’s been inspired by on Netflix. Cooking videos have replaced video games.

Charlie learned a lot about cooking from his dad. His dad’s mother cooked traditional southern and this is the food that intrigues Charlie to recreate in a modern way—the food of his roots.

On a walk to the park together, he stopped and ran his hands over the ground. “This is wood sorrel.” He bit into a leaf and rolled it around in his mouth like someone else might do with a good wine. “See the heart-shaped leaves?” I mistook it for clover.

I listened as he read to me from his cookbook about pickling and preserving. He told me that developing relationships with local farmers is the responsibility a good chef who prepares food seasonally, raised and grown locally.

I learned you can eat the flowers of garlic because Charlie served them to me on the salad he made when we visited the restaurant where he is working the hot line.

I learned that when my son asks you to come for dinner, he will get out a bag of flour and make his own bread as he’s preparing the meat and vegetables.

I learned that when he comes for dinner, he will arrive with fresh herbs and help cook.

“What’s that?” I ask about the spindly, small-leafed twig he laid on the counter as he gave me a kiss on my cheek

“Poor Man’s Pepper.” He put  a leaf in his mouth and rolled it on his tongue. I pulled a tiny leaf off, placed it on mine and did the same. At first, I thought he might be pulling my leg. “Oh, I see why it’s called poor man’s…kinda weak for pepper.” And then it hit. The spicy fire ran across my tongue.

“Where did you get this?”

“From the ground. I picked it.” I thought of the pepper in the grinder I had bought at the store. I smiled as Charlie gave me a wink.

One thought on “Poor Man’s Pepper”