From the distance, the limbs layered with maple leaves look like the tree’s heavy overcoat. Up close, just a breath of air, a bird’s wings and each leaf flutters in independence. How stately and majestic the tree stands in its new summer attire. It wears its age well as unseen life strengthens it—leaf to limb, trunk to root to depths of earth shooting skyward. It’s a sign that summer is coming and with it, reminders of youth when my own roots had not grown deep.

I’ve stumbled around the past weeks, the heavy curtain having fallen around me once again with the sudden loss of a dear friend. I had her in my life just ten years, one important decade and thought she would always be there. I can’t shake the sadness. I’m wearing that old worn-out coat I was certain I had tossed. A tree can shake its leaves, can’t I my depression? As an intruder appears without warning, it snuck into the rooms inside me that my soul mate friend, Sally, left vacant.

Sam stays near my feet, sensing my grief. Unaware, Rose stands at the window on her hind legs, begging to come inside. I open the door and she purrs all the way across the house to the kitchen where I feed her and pet her as she eats. I remember Sally answering her cellphone at midnight as I roamed the neighborhood with Sam, looking for a missing Rose. She’s a huntress, Sally assured me, she’ll be back. She was right. I think of Sally’s cat alone now, without her like me.

We come in, we go out. What do our days add up to and what do I do without my friend, the woman who stepped in when first my brother, then my mother stepped out? Good people gone, one after another and I am still here. Why? Who is worthy to live? Certainly the kind, life-giving nurturers like them. Those who ask, How are you? and really mean it and stop to really listen when you answer. Those who pray into the deep crevices of a lost soul. While deceivers, the selfish, the fearful who have life’s secrets yet to learn before them, or buried deep within, live on. Like me? I ask. Yes, life on earth is about the soul not the body.

Startled from my thoughts by the sound of a boom against the window, I realize a sparrow has hit it and fallen…as have I, time and again.

If I surprised Sally when I told her about my inner uprootings, she didn’t show it. She seemed to understand my poor choices. This was her gift to me. She listened and guided and would inevitably ask, How is Todd? How is Charlie? How is your dad doing? Reminding me how deeply I am loved and carefully removing the weeds of fear, selfishness and shame I was clinging to.

Years ago, I rented a house in a forest off a university campus, nestled safely away from the street. There was a long path leading to my front door with detector lights protecting me from prowlers. These were important because there were prowlers—one at least, maybe two. The owner of the house kept a good eye on me and if the lights went on, he was at his window about sixty yards away. I would see his stern brow, his stare into the dark and know I was safe.

He could keep the prowlers away from my house but not my heart. There, the weeds grew as thick as the garden you saw looking out my kitchen window. It wasn’t my idea to plant it and I had little interest in tending to it. I didn’t realize cornstalks had grown spindly because I wasn’t paying attention. The friend who had insisted I plant it scolded me when he saw the overgrowth and took bags of tomatoes and zucchini home with him. I made a few pasta salads but I didn’t tend my garden.

It seems ironic now as I plant the little plot of ground beside our house, grow squash and tomatoes, peppers and collard greens. No corn but this year maybe an eggplant. I watch the progress each day, watering and pruning. I get so attached to the vegetables it’s hard to eat them. I take photos and add them to the family album. Cooking is a ceremony and when we eat, I say a blessing over the soon-to-be, dearly departed vegetables.

As the tree, the garden grows—its roots, strength and transformative beauty new each day, pulsing with unseen life. I remember then the true Gardner pulsing life through me.

When I turned fifty, just nine days shy of ten years ago, I prayed that in the decade ahead, I would become a powerful woman of faith. I joined a new church where I met Sally, danced for Jesus—literally, to the song with that title, three times. At two different churches and for my brother’s service. As the song instructed, I went to Him from my seat in the congregation to the cross at the altar, sang for, fell on, cried, danced and flew to Jesus. I was eventually baptized in Lake Michigan.

Though it may have felt like it was Sally weeding and pruning me with her unassuming presence and infectious laugh, God was with her, beside her, above and below her. He was in her. He brings people into our lives and takes them out. They are temporary gifts to us on earth but He is ours to keep, the same always—giving us grace to transform, to deepen the roots that take us closer to Him and grow higher, nearer His heart. 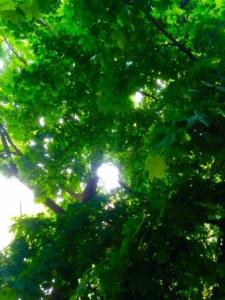 This morning, I hear the still small voice in my heart saying, Grow more dependent on Me and like the tree, you will wear your age well. I thought I was ready to turn sixty but when Todd told me I was entering my seventh decade I suddenly was not so sure.

I smile to myself and think it is a good thing I still have nine days to prepare.