And there it was before me, or there it wasn’t I should say. My path was buried under the earth, its final stretch beneath water.

“Let it have its way,” I said. “What was needed then is no longer needed now. The water has risen and come back to us.” But I still longed to see it, the connection it stood for—me to my loved ones now gone.

It was the summer after my brother died when that big globe in the night poked its head up from the horizon. My first moonrise. A glow of majestic, magenta light turning orange before golden began to lift, and I stared intently at it until its big white face looked back at me. Settling onto its throne in the sky, it shone a light right to me—a pathway of white.

The next day I laid rocks, one after another, from the top of the sand to the edge of the shore, lining up to where the moon’s light had traveled the night before, pointing to the place where the water met the sky—my path to the moonrise, to heaven.

The summer my father died, I found it submerged and headed to the garage for a rake and a shovel and the old wheel barrow, and I started to dig.

The first rock popped up from the ground without too much effort. One stone of forgiveness, a rock of grief released. Then another, and another—they weren’t so deep that they couldn’t be lifted and placed on higher ground. 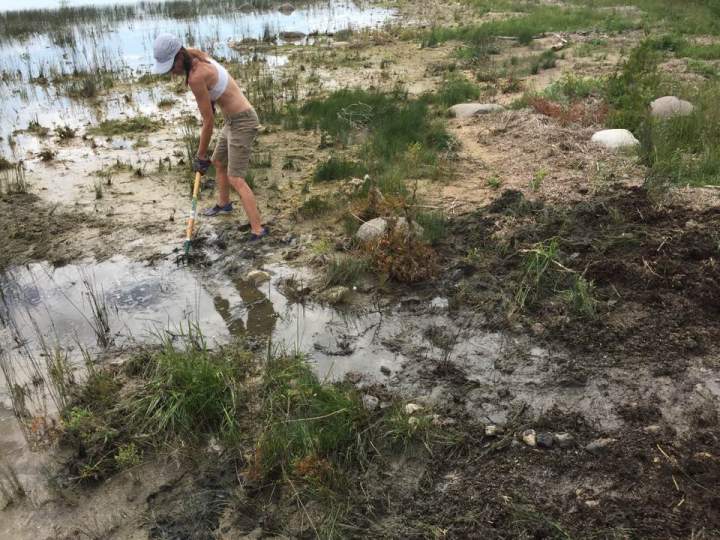 One by one, I began to set them where they could lay beneath the evening’s moonlight and the sun at daybreak. No longer suffocated by the weight—the load I carried—I took a breath, a deep breath, as I saw the rocks line up above ground.

They led to the sea’s debris—a layered, murky meadow of its grass over swamp—easy enough to walk on so I stepped up and there too, began to dig. The black, wet earth exposed, I dug deeper, removing one rake-full at a time, before the old rocks buried there began to reappear.

The earth sunk as I stepped near to the ripples on the water’s edge, so I laid a carpet of sea grass first, then placed logs my husband had cut from the shore’s overgrowth, between the two rows of stone. A new route emerged, wood on wood, stone on stone, over murkiness, until it met up with the water. 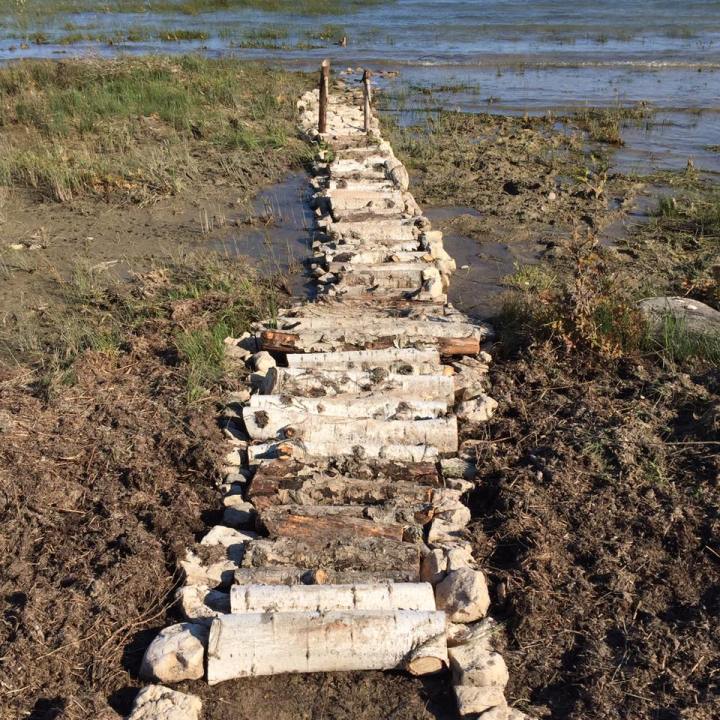 Beneath the water’s shimmer lay the former path, aligned on the sandy floor, looking barely different than random rocks scattered. I dug and lifted, then pushed and rolled them one at a time. They met up with the logs, where I stacked and placed them like a puzzle put together. An elegant entryway laid—sand to wood to rock—to beauty, to Life. 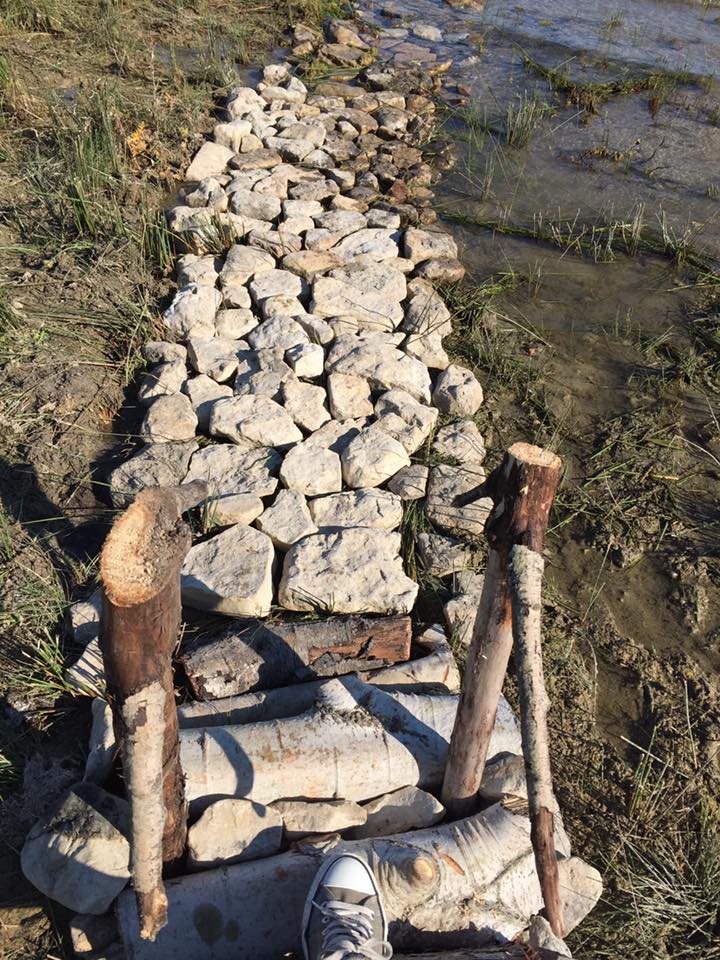 Like emotions—stones hardened within me, black earth needing light—now exposed and laid out, lifted up, I walked to the water, to my LORD through the night. The Rock makes my path solid and I look to His Face—He’s the Moonrise and Sunrise. He’s the Fathet—all Grace. 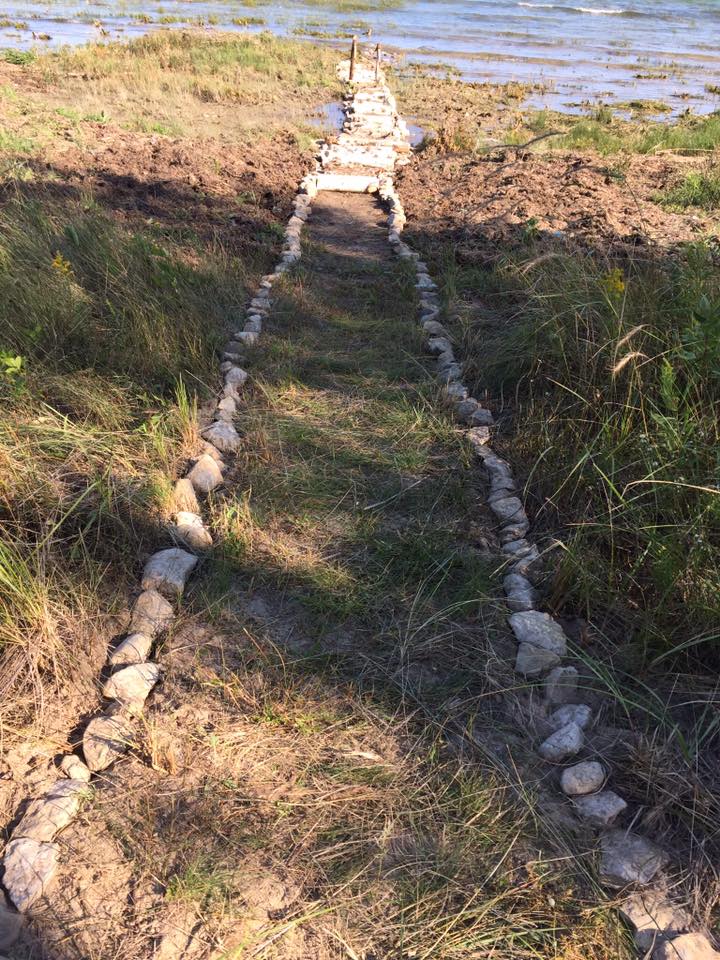 4 thoughts on “Beyond the Moonrise”

My neighbor Ms. Winnie is a walking ray of sunlight. On Thanksgiving morning as we were chatting on the sidewalk, she shared how she gets up every day and does what her late brother, who in spite of his many struggles, taught her to do. He would start the day giving thanks for ten things. She said, ‘I can do that!’ And she does.
Follow Not According to Plan on WordPress.com