I can tell Thanksgiving is going to be a beautiful clear day here in Milwaukee. A little chilly but warmer than it’s been so I slip on my son’s hoodie that he left behind last time he was here, and layer on my dad’s flannel-lined jean jacket to take Sam out. I’m happy Charlie is with his wife’s family in Virginia and, you know, well, that Mom and Dad are together in Heaven, but I miss them all.

I pull my phone out of my pocket, even though I’ve told Todd that I plan to unplug, and search for the story I wrote last Thanksgiving. I find it and smile. I decide to reblog before I prepare to reboot.

Sending my wishes to all for a blessed day of thankfulness.

One Thanksgiving years ago, my dad read a story about some kernels of corn in his Reader’s Digest. He pointed it out to me and shared the magazine but, taking little interest in the subject matter, I didn’t read it. I’m sure my thoughts were on more important things at the time, like what I would wear for the Holiday or when I would be taking my next dance class.

As my husband Todd and I now finish up the final stretch of clearing out my parents’ belongings, I feel a mix of exhaustion and relief. I’m almost certain the process has cured me of a tendency to sentimentalize (otherwise known as, to hoard). I know my mom and dad are together again and that gives me a sense of peace. But I wish I could invite them to just one more Thanksgiving dinner. If I could, I would begin the meal with five kernels of corn…

We had gone to Washington Island (Door County, Wisconsin) to spend Thanksgiving together that year. I can still see the family gathered around the table and Dad walking across the main room of the cabin toward us with the magazine in his hand. The fire crackled in the woodstove and beyond him was an overcast sky that blended in with the water creating one large shimmering grey blanket of beauty. (Just kidding, I don’t really remember that part.) I remember Dad was wearing his serious face as he approached the table–it was a look that would always tempt me to rebel.

As he took his seat at the table, I eyed up our plates which, on each, he had pre set five kernels of corn. I took a quick look at everyone’s faces and started to giggle. I tried to suppress it. I coughed, but caught my younger brother John’s eyes which didn’t help the situation. Dad overlooked it, cleared his throat, and started to read.

Todd sat observing as I looked down at my lap and tried to think of a beloved pet being hit by a car but it didn’t work and my shoulders began to shake. Now John was trying hard too not to laugh. Dad read on. It was about then that I noticed Mom smile as Todd shot me a look. I couldn’t restrain my laughter. It burst. Out. Loud. Dad stopped. He closed his magazine, set it down on the table and placed his napkin in his lap. Silenced, I tried to backtrack and behave, begged him to read on, but the moment had passed. I had blown it. He gave the blessing and we never did hear him read the story.

So this morning, I Googled “5 kernels of corn”, found the story, read it and–really missing Dad–cried. It tells of the fearlessness of our forefathers and mothers, about faith, about overcoming, about the kindness shown by the Indians though kindness hadn’t been shown to them. It’s about gratitude that connects us to God. Dad had wanted to share that. In the midst of all the preparations–the pies and stuffing, the cranberries and figuring out the best way to cook a turkey–he had wanted us to remember the real meaning of Thanksgiving.

I’m tempted to feel sad about the memory of that Thanksgiving…but instead, I’ll think about how happy Dad would be to know that I finally read the story. And that I care about its meaning now more than all the other stuff. 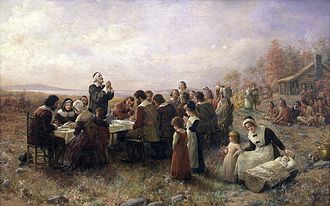 You can bet I’ll be making some corn today…does popcorn count…?

Happy Thanksgiving! (If you want to read the 5 Kernels of Corn story here it is. )

4 thoughts on “Remembering the Corn Story”